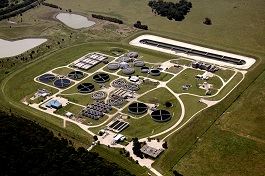 Treated effluent is discharged into Duck Creek, then to the East Fork of the Trinity River and ultimately to the Trinity River, and ultimately into the Gulf of Mexico via the Houston Ship Channel. During dry months, the river may be composed of up to 95 percent wastewater, and performance of the Duck Creek Plant is critical to the Trinity's health and usefulness as a drinking water and fishing source for those downstream.

All solids (sludge) settled at the Duck Creek Center are pumped via twelve-mile sludge transfer pipeline to the City’s Rowlett Creek Wastewater Treatment Plant with ultimate disposal in the City of Garland's Charles Hinton Jr. Landfill.

In 2015, the Duck Creek Wastewater Treatment Plant treated an annual average flow of 27.97 million gallons per day of effluent wastewater. The facility has received several Gold and Silver Awards, most recently Gold Awards for 2014, 2015 and 2017, from the National Association of Clean Water Agencies (NACWA) in recognition of its complete and consistent national pollutant discharge elimination system permit compliance. In 1989, the plant was recognized by the Environmental Protection Agency for “Excellence in Operations and Maintenance.”